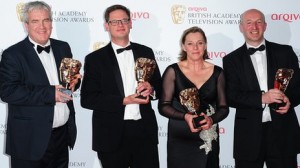 A programme which investigated the Catholic Church’s handling of child abusing priests has won a top award.

The BBC Northern Ireland programme, The Shame of the Catholic Church, won a Bafta in in the current affairs category at a ceremony in London on Sunday night.

The programme was presented by award-winning journalist Darragh McIntyre, who exposed the Iris Robinson affair with a younger man.

The powerful film, for This World on BBC One NI and BBC Two, investigated the failure of the Catholic Church to deal with abusing priests in Ireland.

It was up against Britain’s Hidden Housing Crisis, The Other Side of Jimmy Savile, and What Killed Arafat?

With the help of Catholic Canon lawyer and commentator, the Reverend Thomas Doyle and leading Irish writer Colm Toibin, This World examined the unique relationship that existed between the Irish Catholic Church and state.

It also looked at the great power the Catholic Church once had and explained how the Catholic faithful were too frightened to break the silence and report crimes perpetrated on young victims.

BBC NI Current Affairs executive producer Samy Collyns said: “In the first instance we must recognise the bravery of the victims of abuse from all those years ago who had the courage to come forward and tell their stories.

“I would also like to thank Darragh and the programme’s director, Alison Millar for developing relationships and in building up the trust necessary to persevere in telling this difficult story.

“We accept this award on behalf of all of those who made such important contributions.”

“This was a robust and challenging piece of journalism. I congratulate the team for making it happen and for bringing this story to the BBC’s local and network audiences.

“Winning this second award is not only a tribute to the team, it establishes BBC Northern Ireland as a centre for quality, investigative journalism.”

Earlier this year, the programme won a Bronze Torc Award for Excellence in the same category at this year’s Celtic Media Festival in Swansea.

The Game of Thrones series which is filmed in Northern Ireland won the Viewer’s choice award at the Baftas.