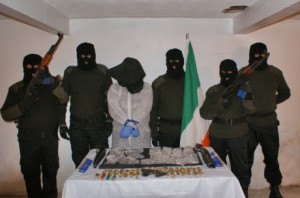 A MAN who police once told a court was a “key player” in a republican drug vigilante group has walked free from court on Monday.

James McGettigan was cleared of allowing his basement to be used by paramilitaries.

The 47-year-old from Strabane, Co Tyrone was found not guilty of providing property for terrorism.

The case arose after photographs showing five masked and armed men apparently holding a bound and hooded drug dealer hostage appeared in the Strabane Chronicle newspaper in May 2010.

It appeared with a statement from Republic Action Against Drugs (RAAD) warning dealers of violent reprisals.

Belfast Crown Court Judge David McFarland said while he believed the basement at the Derry Road property had been used in the photograph.

However, he said he could not be sure to the “requisite standard” that Mr McGettigan, 47, had known about it.

The prosecutuion case was that Mr McGettigan, from the Urney Road, also in Strabane, had allowed the basement to be used and also that he had appeared in the photograph as one of the masked captors.

A facial mapping expert also gave evidence that similarities between the visible features of the masked man and Mr McGettigan “moderate support” to the contention that he was in the image.

However, the judge said he could not be sure beyond reasonable doubt that Mr McGettigan was in the picture.

He also said he could not be sure of when it had actually been taken as he had heard evidence there was no method of proving the date and time setting on the camera had been correct.

He told the court it was as a result of those findings that he was finding Mr McGettigan not guilty on the single count he faced.

This is the latest terrorist trial in which suspects have walked free as the prosecution failed to prove their guilt beyond reasonable doubt.

Last month, Brian Shivers was found not guilty of murdering two soldiers at Massereene after DNA evidence against him was called into doubt.

Last year, Colin Duffy walked free from the same court after a judge said he was not satisfied “beyond reasonable doubt” of his guilt.

The most high profile case to collapse was that of the Crown v Sean Hoey.

The south Armagh stood trial over the Omagh bomb atrocity after a crown witness said he believed the same person made the Omagh bomb along with other devices which exploded in towns across Northern Ireland.