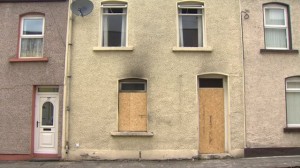 A 44-year-old woman was arrested on Sunday and taken to Strand Road police station for qustioning.

Two men – aged 24 and 25 – were also arrested in Sunday as part of the murder probe bid on Thomas Curry who suffered 40 per cent burns to his body in the attack.

Two youths smashed a window of a house at Benvarden Avenue, in the Waterside  area of Derry/Londonderry around 11.10pm on Friday and threw the lit bomb inside.

It struck the 45-year-old man as he sat in the living room and he suffered burns to almost 40% of his body. He was rescued by two neighbours.

The police are treating the attack as attempted murder.

The man is being treated at the Royal Victoria Hospital in Belfast and has undergone at least two operations.

Inspector John Burrows praised the rescuers but described the attackers as “cowards”.

“This was a very sinister, deliberate attack,” he said. “This was an attempt to cause serious injury or death.

“Two members of the public, good neighbours, risked their lives to go into a house that was on fire.

“There’s no doubt their actions saved his life and what a contrast between those two individuals and the two criminals who tried to kill this man.”

He said the victim was a “gentle individual” who had done “nothing to deserve this”.

Inspector Burrows urged anyone with information about the attackers, or who knew of a motive for the attack, to contact police.

“We need the names of these people,” he said.

“It is extremely fortunate that we are not looking at a fatality. But this man will live with serious injuries for the rest of this life.”

One of the man’s rescuers, who did not want to be identified, described what he saw when he got into the house.

“I got down as low as I could in the smoke. The sofa was then on fire, which lit up the room a bit more, and that’s how I saw him.

“I couldn’t see a thing until the flames were sort of caught on the couch.”

The rescuer said they managed to drag the injured man off the floor and out of the house, but by that stage the victim’s clothes had “melted to the floor”.

SDLP councillor Gerry Diver went to the scene shortly after the attack.

“Benvarden Avenue is a row of terrace houses, this incident could have been much more serious as a fire in one property could have easily spread to the adjacent properties on the street,” he said.

“Petrol bombs are lethal weapons. If it hadn’t been for the swift actions of this gentleman’s neighbours, we could have been dealing with a tragedy,” Mr Diver added.

Police said the two attackers, who were male, wore grey hooded tops and had scarves over their faces.

It is believed that they made off in the direction of Dervock Place.