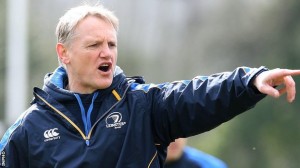 JOE Schmidt is to take over as head coach of Ireland, the Irish RFU announced on Monday.

The New Zealand-born Leinster coach has been the favourite to succeed Declan Kidney whose five-year tenure ended after a disappointing Six Nations campaign.

Schmidt was backs coach at Clermont Auvergne before guiding Leinster to Heineken Cup triumphs in 2011 and 2012.

He is expected to sign a three-year deal with the Irish RFU, running until the end of the 2015-16 season.

They have also qualified for the Pro12 play-offs and can make sure of a home semi-final by beating the Ospreys at the RDS Arena on Friday night.

Last October, Schmidt signed a one-year contract extension at Leinster, taking him to the end of the 2013/14 season.

But he will now soon be leaving the province to take on what he says is one of the biggest jobs in world rugby.

The Irish Rugby Football Union has organised a media conference for 4pm on Monday to unveil Schmidt as coach of the international side.

Current Ireland defence coach Les Kiss, a former North Sydney Bears winger, is to take charge of the Irish team for the summer tour matches against the United States and Canada.

Ireland then host Samoa, Australia and New Zealand in the 2013 autumn internationals.

Former headmaster Schmidt was in charge of the New Zealand Schools side before coaching Bay of Plenty in 2003, guiding them to the Ranfurly Shield.

He was assistant at the Auckland Blues before his move to French side Clermont.

Leinster, meanwhile, appear to be already lining up a successor to Schmidt, with Leicester coach Matt O’Connor emerging as the favourite.

O’Connor was backs coach with Canberra club the Brumbies for four years before taking over at Leicester.