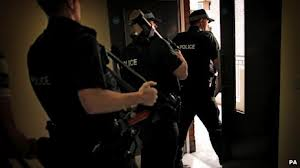 TWO women are to be deported to Sweden after they were arrested during raids on brothels across Greater Belfast.

The raids were carried out during a joint operation by the PSNI and Swedish police against human trafficking.

The searches, which saw two potential victims rescued, were carried out by the PSNI’s Organised Crime Branch on Thursday.

The suspects – Aura Gabriela Anghel, 20, and Ancota Schwarz, 27 – who are both Romanian nationals with addresses at Malone Grove in Belfast, appeared before Belfast Crown Court.

During Friday afternoon’s legal proceedings, both women agreed to be deported to Sweden to face charges on foot of European Arrest Warrants obtained by Swedish police.

A defence lawyer told Judge Gordon Kerr QC that Anghel and Schwarz consented to the deportation, but that they will “vigorously contest” a charge of aggravated procuring once there.

Asked by the judge if they understood that agreeing to be deported meant they lost the right to appeal the order and that they would be extradited immediately, both women replied: “Yes.”

They will now be flown to Stockholm, where the legal proceedings will continue.

The PSNI and Swedish police have been working together for months as part of Operation Burgrave.

A number of items including documents, phones and computers were removed from the Belfast properties which were searched and are now undergoing detailed examination by investigators.

Potential victims – a number in Sweden and the two rescued in Northern Ireland – have all been taken to places of safety to be interviewed by specially trained officers.

“The Joint Investigation Team agreement between the UK and Sweden was reached with the assistance of PPS prosecutors and has enabled our teams of officers to progress inquiries and activity more quickly and effectively,” he said.

“Much work remains to be progressed, but we believe the action in Northern Ireland, Sweden and Romania has provided important momentum to our collective efforts.

“We believe we have halted the activities of an organised crime gang involved in controlling prostitution and human trafficking in Northern Ireland, Sweden and Romania.”