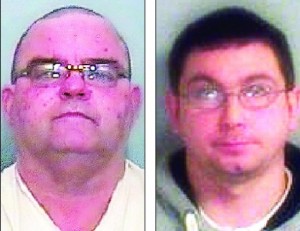 TWO Northern Ireland men have jailed for a total of eight years after customs officers smashed the illegal importation of millions of cigarettes through Dover.

Gary Taggart, 30, from the Tamlaght Road in Omagh, Co Tyrone and Belfast man Josephy Maguire were behind two failed attempts to smuggle 12.5 million non-duty paid cigarettes into the UK.

The duty and VAT evaded on the haul is £2.5 million.

The HM Revenue and Customs (HMRC) says that Taggart Maguire were behind the two failed attempts but were caught by HMRC criminal investigators.

John Cooper, Assistant Director, HMRC said that Maguire and Taggart were at the “heart of a calculated attempt” to flood the UK with millions of illegally smuggled cigarettes.

“They thought that using false consignment information, a remote lock-up and 16 mobile phones would make their crime undetectable, but they were wrong.”

Boxes of cigarettes from the first 4.5 million consignment were already being loaded onto a hired van when HMRC officers arrived at Unit 7, Blackcroft Farm, near Reading on 10 February 2011.

They arrested Thomas Troke, 31, of Iver, Bucks, and Clinton O’Connell, 55, from Reading.

Taggart, the lorry driver who had brought the cigarettes into the UK in his trailer unit, had already left the scene.

The following day, he was stopped by Border Force officers at Dover.

A search of his trailer revealed that his load, described as ‘foodstuffs’, was in fact eight million smuggled cigarettes, and he was arrested.

Further investigations by HMRC led them to Maguire, who was arrested on 1 August 2011 as he arrived at Stansted Airport on a flight from Belfast.

Taggart and Maguire denied smuggling 12.5 million cigarettes in two separate consignments but were found guilty after a trial at Reading Crown Court.

Troke and O’Connell had pleaded guilty to their involvement in the first, 4.5 million smuggling attempt.

All returned to Reading Crown Court for sentencing where Taggart was jailed for three years and Maguire to five years imprisonment.