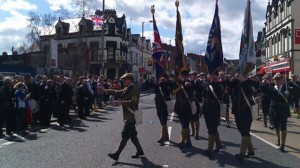 THOUSANDS of people are taking part in a parade in east Belfast to mark the 100th anniversary of the foundation of the Ulster Volunteer Force.

The organisers of Saturday’s parade said it had nothing to do with the modern-day paramilitary group.

The parade started off from the Ravenhill Road around 11 am with horses leading out the marchers, some of whom are dressed in period costume

It will make its way around east Belfast before a rally at Craigavon House where the original UVF was formed.

Organisers say there is no link with the modern-day outfit.

Hundreds of UVF flags were erected in broad daylight along the parade route last weekend.

Police said the flags are not related to a proscribed organisation and offered to meet local community groups.

Ulster Peoples’ Forum spokesman Jamie Bryson has been banned from the UVF parade on Saturday.

A court banned him from going him from going within a mile of any public demonstration or procession while on bail for charges linked to the Union flag dispute.

His lawyers cited human rights arguments for a temporary lifting of the prohibition so he could be at Saturday’s event in east Belfast which he helped organise.

But, a district judge refused the application after holding that ensuring public order must take priority.

Bryson, 23, of Rosepark, Donaghadee, Co Down, faces six charges connected to the controversy over restricting the flying of the union flag at Belfast City Hall.

They involve allegations of encouraging or assisting offences, and taking part in an unnotified public procession.

He was released from custody last month on tight conditions, including a ban on being within four miles of Belfast City Hall except for court appearances.

He must not take part in protests either, give speeches or make comment on social media before, during or after any protests about the flag dispute.

Bryson was seeking permission to attend the parade being staged to celebrate the founding of the old UVF 100 years ago, and an evening event at a social club in the area. 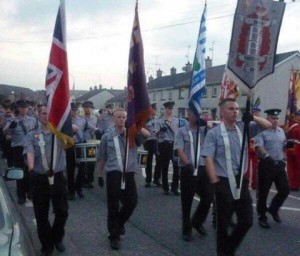 Opposing his application, a police officer told Belfast Magistrates’ Court 40 bands and crowds of up to 12,000 were expected.

She expressed concerns that he could have a negative influence on others.

His pastor has presented a letter stating he has a positive influence. Police would state the contrary, that he has encouraged young people out on the streets.

Although the parade will not go near any sectarian flashpoints, the court was told tensions are high at the Short Strand interface due to public disorder following former Prime Minister Margaret Thatcher’s funeral on Wednesday.

Seven police officers were injured by bottles, stones and other missiles in attacks on Wednesday, the court heard.

The centenary parade will mark the founding of the original UVF to fight Home Rule – many members later fought in the First World War at the Somme.

The present day paramilitary group of the same name was formed more than half a century later.

Defence barrister Richard McConkey stressed that the event was years in the planning and had nothing to do with the flags dispute.

Bryson was not asking to be allowed to address the crowd, he told the court.

“This is a lawful parade, it’s a celebration held in east Belfast,” Mr McConkey said.

“Mr Bryson is not a hanger-on in this, he’s been involved in the organisation of this for over two years, he’s been on the committee and he’s been assisting it.”

Refusing to vary Bryson’s bail conditions, the judge ruled that it was too early for any amendments.

He said: “The concern about maintaining public order at this stage outweighs his right to participate in the parade.”

Meanwhile, loyalist campaigner Willie Frazer was also in court for an update on his case.

The 52-year-old, from Markethill, Co Armagh is accused of encouraging offences by an address to demonstrators, taking part in an unnotified public procession, obstructing traffic, and possession of a prohibited weapon, namely a Taser stun-gun.

Prosecutors told Belfast Magistrates’ Court they were still waiting for a forensic report on the Taser.

Computer items are also being examined as part of the case, the judge was told.

Frazer, who is out on bail, was instructed to return to court next month for a further progress report.