SILENCE OF THE RAMS: TWO SHEEP FOUND AFTER THREE WEEKS IN SNOW 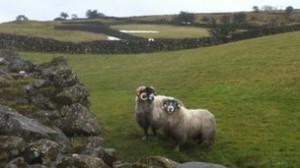 THESE are the two sheep which had been trapped in snow and have now found been alive after three weeks.

They miraculously survived in an air pocket in a ditch covered in 6ft for 23 days without food in freezing conditions in the north Antrim hills.

And when the thaw started, the pair of Blackface rams were able to drink water and eat off each other’s woolly coats.

The rams, each worth more than £1,000, were trapped in a ditch beside a stone wall in hills near Slemish mountain.

Another ram was with them but tragically died the sub zero temperatures.

The Wallace family farm was one of 790 farms caught up in the snow blizzard that led to the deaths of more than 20,000 sheep last month.

Norman Wallace and his son, Graham, presumed their rams were among the dead until a neighbour, Richard Jolly, spotted them earlier this week while out walking his dog.

Graham said: “I couldn’t believe it. When we got to them they weren’t in great condition, understandably.

“It was hard to know what to do. They had faced starvation for three weeks. We let nature take its course and just let them roam.

“If we had pampered them they would have died – they couldn’t have handled a big meal.” 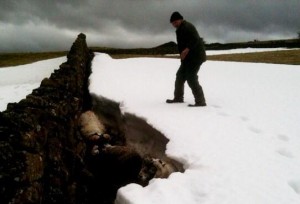 At first, Graham did not believe the sheep could have survived in the snow for so long.

“It was great to see them alive. It gives you a bit of hope when something lives, given what farmers have been through in this area.”

His father, Sam, said the stone wall created air pockets below the snow that helped the rams to survive.

But he added: “At the end of the day it was a miracle. You hear in the scriptures about miracles.

“There are still miracles today – and this was definitely one of them. It was amazing to see them still alive.”

It will take the sheep some time to fully recover but they are back in the field with the rest of the flock, and gradually regaining weight.

They may no longer have the same spring in their step, but in the words of one local farmer, the once-lost sheep have a whole new fleece of life.