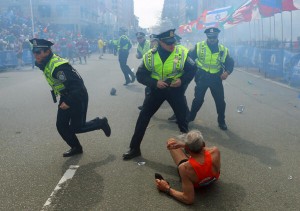 THREE people have been killed and up to 141 people injured when two bombs exploded at the Boston Marathon on Monday afternoon.

One of those killed in the no-warning blasts is an eight-year-old boy.

Among the injured are 17 people who are critically ill in hospital. A further 23 are seriously injured.

Eight children are among the injured.

Some of those being treated are amputees who lost limbs in the blasts.

The FBI has now taken over as head of the investigation to determine if it was a “terrorist incident”.

Police said two bombs went off and there are suspicions that five other devices did not detonate as planned by the terrorists.

Reporters at the scene said a number of spectators were left limbless following the double bomb blasts at the finish line of the marathon within seconds of each other at 3pm Boston time.

There are a number of people from Northern Ireland taking part in the marathon raising money for charity.

One of those who was taking party was former Northern Ireland champion boxer Eamonn Loughran.

In an address tonight, President Barack Obama vowed to hunt down those behind the bomb blasts and put all federal resources at the disposal of the Boston authorities.

“On days like this there are no Republicans or Democrats – we are Americans, united in concern for our fellow citizens,” said President Obama.

“We will find out who did this and hold them to account.

“The people of America will say a prayer for Boston tonight.”

Boston Mall has been evacuated along with other parts of Boston following reports of unexploded devices in the city.

Police in the city have shut down the mobile phone network for fear it could be used to detonate further devices.

The airspace above Boston has re-opened but the airport remains closed.

Boston police have advised the public to stay indoors and not congregate in large crowds.

Kevin Cullen of the Boston Globe told RTE’s 9 o’clock news: “People at the scene have seen a number of limbless people and lifeless people.”

Boston Police Department confirmed that two people had died and reports suggest up to  people are now being treated in hospital following the attacks.

According marathon organisers, at least 100 runners had registered as ‘Irish’ among the 30,000 taking part.

It is estimated that around 500,000 people lined the streets for the marathon which is held on a public holiday. 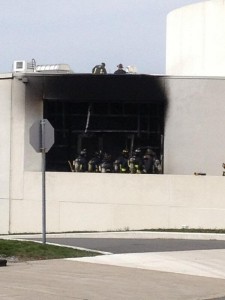 Boston Police earlier had been urging people on social media to tell people to “get out of the marathon” and stay away from the JFK Library where at least one explosion was reportedly heard.

Firefighters are now tackling a fire at the library but it is still not known what caused it.

Police now say it is now related to the bomb explosions at the marathon finishing line.

They have also denied reports that a suspect is currently in custody.

However, some American news channels claims a known Saudi national is under armed guard in a hospital being treated for his injuries.