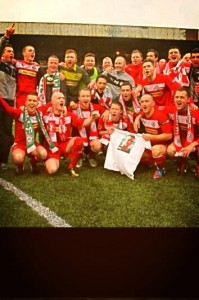 IT was a last gap kick that helped Cliftonville win the Gibson Cup for the first time since 1998.

Striker Liam Boyce was taken down in the Linfield box and with just 20 seconds on the clock, captain George McMullan stepped up and slotted home from the penalty spot to give the Reds a 3-2 win.

And with that a deafening roar went up around the Solitude ground in north Belfast as the Reds knew they had won the league for only the second time in 103 years.

But Cliftonville didn’t have it all their own way. And Linfield will be ruing a bagful of chances all afternoon.

But despite the goal, Linfield should have pegged back the score.

Reds keeper Conor Devlin has pulled off several wonder saves and Linfield’s Mark McAllister has been denied a goal on four occasions.

In the second half Linfield drew one back to, and Cliftonville got their noses ahead agains for only Linfield to draw again.

But with four minutes added time on the clock, it looked like Cliftonville would have to wait another day to crowned champions.

However, as Liam Boyce went through into the box he was taken down and referee Davy Malcolm had no hestitation in pointing to the spot.

And Captain Fantastic George McMullan hit the back of the net, sending the fans delirious.

Now Cliftonville will look forward to the Irish Cup final next month against Glentoran and do a treble.