GIANTS KNIFED BY STEELERS AS CHRISTIANSEN QUITS FOR SHEFFIELD 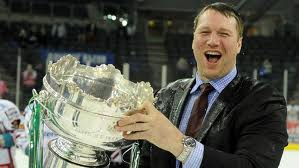 THE STENA Line Belfast Giants have assured fans that the hunt for a new coach starts today.

Club officials and fans were left “shocked” after coach Doug Christiansen announced on Monday evening that he was leaving the Odyssey team to take charge of the Sheffield Steelers.

Christiansen had spent three years with the Giants and led them to the Elite League title in 2012.

The Giants finished second in both the league and play-offs this year.

The Belfast Giants said on Tuesday: “We would like to assure our fans that the search for a new coach starts today.

“The Giants were only informed after 6.30pm on Monday by Doug Christiansen of is decision to leave and have been left shocked by the timing of this,” the club said.

Christiensen’s departure came less than 24 hours after he was behind the bench in the play-offs final, losing to Nottingham Panthers in overtime.

The Panthers also pipped the Giants to the Elite League title although Belfast won the inaugural Earhardt Conference Trophy.

While unhappy with the time of his decision, the Giants added that they “would like to thank Doug Christiansen for his 100% work ethic and commitment to the Giants during his three years behind the bench for the Belfast.”

The 34-year-old American has been appointed Steelers coach for the next two seasons.

Christiansen replaces Ryan Finnerty, who left Sheffield last week after his contract was not renewed.

“I am sure this is the appointment that will help see an upturn in the club’s results and title aspirations,” said Steelers owner Tony Smith.

“Our fans deserve the best we can find and a man who has strong leadership qualities, technical ability and motivation powers to get the best out of our team every single night.

“I’m delighted that the move has come about so quickly, that was unexpected as I thought finding the right candidate for the job would take a little longer.

“However, after speaking with Doug I was sure we had the right man right in front of us.”