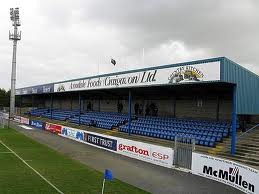 Dire financial warnings from Glenavon board at Mourneview Park

THE board of directors of Glenavon FC have warned that the club is heading for financial crisis unless it can come up with more funds.

In a statement issued on Wednesday night, the Mourneview Park club urged its supporters to dig deep and help keep the club afloat.

The board said: “Some weeks ago we launched a fundraising campaign to raise £30k to enable Glenavon to meet its financial obligations to the end of the season.

“We would want to put on record our sincere thanks to those supporters and friends who to date have enabled us to raise almost £5k.

“Nevertheless the reality is that this is far short of the amount needed to meet our financial obligations between now and end of the season.

“We accept that for many these are difficult economic times and we realise that some will not be able to afford to give as much as others.

“Indeed our club was only able to get through the month of March and meet its major obligations (salaries and VAT) because directors, once again, donated sizeable amounts to the club. This state of affairs cannot be allowed to continue.

“We would therefore urge that you support the current fundraising initiatives. Recently a major end of the season draw with some excellent prizes has been launched and we ask all supporters and friends to contribute.

“If you feel you could assist by selling tickets please contact any of the directors. You can also provide additional funds through shirt sponsorship, buying lottery tickets or giving to future bucket collections at home games.

“We have also three home league games left before the end of the season and we would also ask that anyone who has the best interests of Glenavon at heart, even if they haven’t been to a game for number of years, to make every effort to attend.

“Over the recent years in order to remain financially viable we have made significant reductions in expenditure. In particular, the wages budget available to the manager is considerably less than it was a few years ago.

“Further reductions would inevitably have an impact on the quality of the playing squad available to the manager and seriously compromise our ambition to remain as a competitive Premiership club operating on a semi-professional basis.

“It is the responsibility of everyone with the best interests of Glenavon at heart to make sure we do not reach a position where we consider we are unable to continue operating as a Premiership club.

“Last year in an effort to improve our financial position we launched the “Mourneview Needs You” initiative. This allowed supporters to contribute as much as they thought they felt able to afford.

“We thank those 57 individuals who have joined up to date but we feel there are many others in the wider Glenavon family who could contribute. What a difference 100 additional people giving £15 per month (50 pence per day) – or whatever amount they wish to donate – would make. Again, if you feel you wish to sign up or make a one-off donation please speak to any director or contact the club office or use the PayPal links at the top of the page.”

The statement concluded by saying: “This is our club, our future. We all have to do everything we can to make sure it is a successful one.’’