NORTHERN IRELAND WILL BE USED AS A BACK DOOR FOR CRIMINALS, SAYS LORD EMPEY 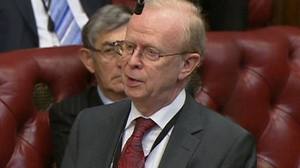 ULSTER Unionist Peer Lord Empey has pressed the Government over the Stormont Executive’s failure to agree a legislative consent motion for the National Crime Agency.

The NCA was vetoed by Sinn Fein in the Assembly on the grounds that its work could not be held to public account.

Lord Empey re-stated his concerns that Sinn Fein’s vetoing of the establishment of the National Crime Agency in respect of devolved matters.

The former east Belfast MLA said it will inadvertently result in Northern Ireland being used as a back door whereby people who are focused on crime could use the absence of the NCA to carry out their activities unmolested.

This he said could only be prevented if the PSNI undertakes some of the roles that would otherwise have been carried out by the NCA in Northern Ireland.

Speaking in the House of Lords on amendments to the Crime and Courts Bill, Lord Empey said:

“That will incur a cost to the PSNI that I doubt very much there are currently resources to meet.

“It also means that the national expertise that the National Crime Agency could bring to bear on these criminals will not be brought to bear.

“Common sense dictates that where you have a vacuum, people will fill it.

” While I accept the regrettable need for these amendments, I do not share the Minister’s current optimism that these matters will be resolved by negotiation. I just do not believe that they will be resolved.

‘I was always concerned about the devolution of policing and justice to Northern Ireland in the absence of a full agreement between the parties on how things would be done.

“There was no such agreement. It was a political necessity that was politically driven in the same manner as the euro was. The working out of the downstream consequences had not been done. It is therefore a matter of deep regret. “

He added: “Can the Minister tell the House what steps the Government will take if evidence emerges that there are elements of activity in Northern Ireland that are not dealt with by the PSNI, thus creating a vacuum in which people can indulge in criminal activities which could spread to the mainland?

“In circumstances where agreement is not reached, where the Executive do not make alternative arrangements to pursue crime as was intended by the NCA, and where evidence emerges that crime is developing in Northern Ireland and is being spread to the mainland, what steps will the Government take?

Responding for the Government, Lord Taylor of Holbeach said:

“We are not in the business of creating gaps. The NCA was intended to close gaps in the current arrangements. That was in the Bill that we planned to create, but the Executive could not agree, which is why these amendments are before the House.

“We remain open to discussion and we have provided the necessary order-making powers to fully extend the NCA provisions to Northern Ireland should the position of the Executive change.

“Assuming the Executive stick to their decision, it is up to them to decide how to develop alternative capabilities for Northern Ireland to replace the work currently done by SOCA.

“As I have said, we are committed to providing as much operational capacity and capability as possible for the NCA operating in Northern Ireland.

“But, as I made clear, in the absence of legislative consent there are some things that the NCA will no longer be able to do, such as using Northern Ireland police powers to investigate serious and organised crime. This is to be regretted.”

Lord Empey replied: “I particularly welcome the Government’s assurance that in the event that agreement is not reached and where the Executive do not make alternative arrangements to pursue crime as was intended by the NCA, and where evidence emerges that crime is developing in Northern Ireland and is being spread to the mainland, the Government of the United Kingdom ‘will respond in a responsible manner.’

“The people, of Northern Ireland and their fellow citizens in the rest of the United Kingdom will demand that assurance is kept.”


One Response to NORTHERN IRELAND WILL BE USED AS A BACK DOOR FOR CRIMINALS, SAYS LORD EMPEY