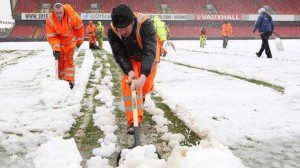 NORTHERN Ireland’s World Cup qualifier against Russia at Windsor Park has been postponed for a second time due the weather conditions.

Norwegian referee Tom Hagen and a team of match delegates called off the rearranged game, which had a 3pm kick-off, on Saturday morning after ice formed on the Belfast pitch following heavy snowfall overnight.

The decision came after the Irish Football Association called on all Northern Ireland fans to come to Windsor Park and help clear snow from the pitch.

“Bring shovels. Game is still in doubt though,” the IFA tweeted from their official account earlier.

On Friday, teams had already worked hard to try to clear the snow before the referee declared the pitch unplayable following a series of inspections.

It is unclear when the international fixture will be played.

Russia face Brazil on Monday while Northern Ireland are due to play against Israel at home on Tuesday night.

As a result of Friday’s change of date for the international game, Saturday’s league fixtures – which were all due to kick off at 3pm – were all postponed.

Ballinamallard were due to host Linfield, Cliftonville should have met Ballymena United, Dungannon Swifts were supposed to face Donegal Celtic, Glenavon were to play Coleraine, Glentoran should have hosted Crusaders and Lisburn Distillery should have met Portadown.