FOR GOD’S SAKE GIVE ME BACK MY MEDAL, SAYS BELFAST OLYMPIAN BOXER 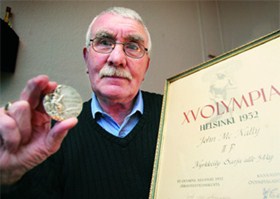 AN Olympic silver medal winning boxer from Belfast has made a heartfelt plea for the safe return of his prized possession.

John won the medal at the 1952 Helsinki Summer Olympics then aged 19.

But he says it’s worthless to those who stole it, but priceless to him and his family.

When he took silver in the Bantamweight division 60 years ago, John became the first ever Irish boxer to win an Olympic medal.

John normally keeps the medal hidden, but when he went to retrieve it last Friday night to display it at a sporting function, it could not be found.

On Saturday, the box turned up in the room of the south Belfast residential home where John lives, but it was empty.

“It’s the most peculiar thing,” he said.

“After all these years, it was never out of my sight except when it was hidden away.

“I brought it out to shows, different shows all over the country and I always kept it safe.”

John regularly showed the medal to young people in the hope that it would act as an incentive.

“When I came back from Helsinki my club was inundated with new members and it was the same all over town from what I gather.”

He added that when children saw his medal, they understood what they had to do to achieve it and wanted to become successful also.

John recalled crying his eyes out when he lost his final against Finnish opponent Pentti Hämäläinen, in what he described as “a messy fight.”

But, much to his shock and awe, pandemonium awaited him when he returned to Dublin after his stint at the games.

And on his arrival home to Belfast by train, he couldn’t escape the swelling crowd of well wishers.

John said that since the theft , he, his family and many supporters have been praying for the medal’s safe return.

“Everybody knows that medal is mine.”

PSNI are continuing to investigate the theft.

Anyone who has any information about the theft or has been offered it for sale has been asked to contact police on 0845 600 8000.