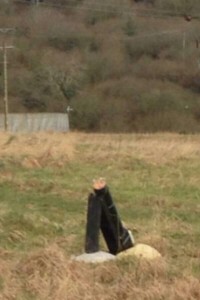 EXCLUSIVE: This is the dissident republican mortar bomb and launcher found aimed at a west Belfast PSNI.

Lying on waste ground, the lethal device was primed and ready for launch.

On Friday afternoon, Army technical officers have carried out a controlled explosion on the device.

It is the second time dissidents have tried to mortar bomb police stations in Northern Ireland within the past two weeks.

Security sources told Belfast Daily that “carnage has been averted” on Friday morning after a mortar device and launcher were spotted.

The launcher was pointed in the direction of New Barnsley PSNI station.

Police officers are at the scene of what the PSNI are saying is a suspected mortar bomb find on the Ballygomartin Road not far from the local New Barnsley PSNI station.

The fortified base straddles the peaceline the nationalist Springfield Park and the unionist Ballygomartin Road.

As a result of the alert, part of the Ballygomartin Road has been closed between its junctions with Highcliff Gardens and Springmartin Road.

The alert caused traffic problems for relatives and friends attending a funeral in the Springhill area of west Belfast.

Army technical officers were tasked and after seven hours of examining the mortar device and launcher have carried out a controlled explosion.

Prior to the controlled explosion, the ATO were were also looking for any possible booby-trap devices left by dissident republicans.

The mortar device and launcher were discovered by a local taxi driver shortly after 7.00am this morning on waste ground close to Springhill Primary School and Springmartin estate.

A security source said the device is around 400 yards from the perimeter wall of the police station which is believed to be the intended target.

“These new mortars are very capable of reaching that distance,” said the security source.

“The dissidents are getting very sophisticated in the devices they are using. By finding this before it detonated has saved lives.

”Major carnage has been averted because if this had have gone off and missed its target, it would have dropped into a residential street.”

North Belfast DUP MLA Alderman William Humphrey has slammed those responsible for a suspicious device which has caused a major security alert on the upper Ballygomartin Road this morning.

The MLA said: “It is pointed in the direction of New Barnsley Police Station which would appear to have been the intended target.

“The resulting security alert has caused the closure of Springhill Primary School and Black Mountain Primary School, closure of upper Ballygomartin Road and local residents are being evacuated from their homes.

“The security forces have to be mindful of secondary devices so clearing this alert is likely to take some time.

It is utterly appalling and disgusting that terrorists should put lives at risk by preparing such an attack.

If this device had been deployed it could have caused indiscriminate slaughter, whether in the police station or among people living in houses on either side.

“The fact that it was discovered close to two primary schools only adds to their recklessness.

“This is a reminder of the terror which some deranged people want to drag us back to.

“They will not succeed and I call, in the strongest possible terms, for anyone who can assist the police to catch those responsible and bring them to justice, to pass on whatever information they have.

“Thereby they will save lives and save the community from further murderous attacks.

“This is a reminder, to those who would seek to glorify or excuse acts of terrorist violence, that such terrorism is utterly squalid, murderous and indiscriminate in its consequences, and no-one should seek to excuse it.”

Belfast City Council has established Emergency Rest Centres at Ballygomartin Presbyterian Church Hall and at Whiterock Community Centre for residents who have been evacuated from their homes.

The PSNI said: “Springhill Primary School will not open while the security alert is ongoing.”

The Ballygomartin Presbyterian Church Hall has been made available to anyone affected by any evacuation.

Friday’s alert is not far from where an undercar booby trap bomb was found last November Ballymacarry Lane.

The viable device was first believed to have fallen off the car of a female member of the PSNI’s police staff.

However, further checks by the the PSNI revealed that the device had in fact fallen off a car driver by a British soldier.

Dissident republican group Oglaigh na hEireann where behind the murder bid on the serving soldier.

A white Citroen Berlingo van, fitted with Dublin registration plates, was tailed from the direction of Donegal.

Following behind it was a motorbike and rider.

However, as the convoy reached the Letterkenny Road, TSG units sprung a carefully planned trap and halted the van and motorbike.

Two men – Seamus McLaughlin and Gary McDaid, known leading dissident republicans in the city – were arrested and later charged over the bomb find and remanded in custody.

Police said the improvised mortar bomb van was just five minutes from its target when it was intercepted.