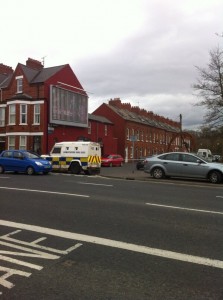 POLICE have said a suspicious object found in south Belfast was a hoax.

A number of homes had been evacuated in Kinallen Street off the Lower Ormeau Road close to the embankment.

Army technical officers were tasked to the scene and Artana Street and Dromore Street are also closed to traffic.

The PSNI’s ‘hawkeye’ helicopter also provided aerial support to officers on the ground during with the alert.

However, after the ATO examined the device police said it was a hoax.

All roads in the area have now reopened and residents have been allowed to return home.