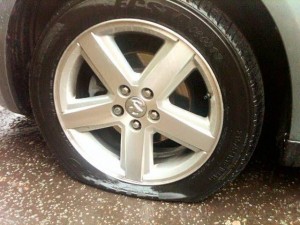 POLICE are seeking the public’s help in catching those behind a spate of attacks on cars in east Belfast.

A total of 12 cars were damaged in the Cregagh estate during last Friday nights Ulster Rugby match against Treviso at nearby Ravenhill.

Some of the damage included the slashing of car tyres.

“This damage is more than likely to have occurred between the hours of 7pm-11pm, during the Ulster Rugby match,” said the PSNI.

Residents in the area have called for a greater police presence at the entrances to the Cregagh estate to thwart the attackers.

One said: “It appears some people on the estate don’t want Ulster fans parking outside their houses.

“But this type of conduct can’t be condoned. If residents don’t want someone parking outside their doors they can ask them to move on. Criminal damage is not the answer.”

Fans have been using the streets of the Cregagh estate and Mount Merrion Park to park their cars and walk to the nearby ground.

Anyone with information about the attacks can contact PSNI Castlereagh on 0845 600 8000 or pass the information confidentially to Crimestoppers on 0800 555 111.