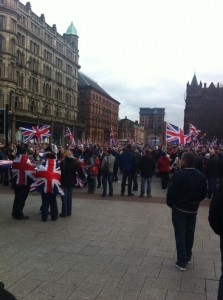 The 24-year-old was detained in Portadown on Sunday morning by officers from Operation Dulcet which was set up to probe the protests.

He is being questioned about offences related to the protests.

A PSNI spokesman said he has been released on bail pending further enquiries.

On Saturday, two of the most high profile Union flag demonstrators appeared in court.

Jamie Bryson, of Rosepark in Donaghadee, has been charged with two counts of encouraging or assisting offenders and four counts of taking part in an unnotified public procession.

The 23-year-old was remanded into custody for four weeks to Maghaberry prison.

Former BNP fundraiser, while Jim Dowson, of The Burn Road in Comber, was released on bail.

The 48-year-old was ordered to hand over any portable devices for computers as police claimed he was a regular to Facebook pages organising marches over the Union flag.

The 52-year-old, of Markethill, Co Armagh, was also accused of possessing a stun gun.

He was the first person in Northern Ireland to be charged under the Serious Crime Act 2007..