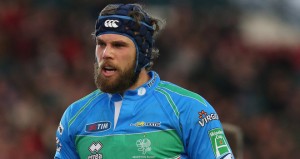 THIS was a result that was not in Mark Anscombe’s mind or in his script before kick-off.

But the Ulster coach was thoroughly disappointed after a hat-trick of tries from Dean Budd earned Treviso a dramatic 29-29 draw at Ravenhill in east Belfast on Friday evening.

The score knocked Ulster off the top of the RaboDirect Pro12 in front of a home crowd of 10,678.

The home side looked to be strolling to victory after brilliant scores from Andrew Trimble and Stuart Olding but they were punished for a series of sloppy errors.

An early Alberto Di Bernardo penalty gave Treviso the lead before Ulster hit back with 17 unanswered points in a dominant spell.

First Iain Henderson produced a neat flick-on from a line-out, the ball found its way to Trimble and the winger showed the opposition a clean pair of heels as he darted over.

The next score was even more special as the ball broke to Olding from a driving maul and the 19-year-old took out three men with a dip of the shoulders, before shrugging off another two for good measure to crash over the line.

It was the teenager’s second try in as many games and his first senior touchdown on home turf. Both scores were converted by Paddy Jackson, who squeezed home a penalty in between.

Ulster were in control at this stage but Treviso began to claw their way back into the game, with the pacy Brendan Williams at the heart of everything. And their pressure paid off when Budd’s converted try reduced the deficit to seven points at the break.

Another Jackson penalty stretched Ulster’s advantage to 20-10 but when Lewis Stevenson was sin-binned for a high tackle, Treviso took full advantage. Barbieri was left in space after a driving maul and had the simple task of placing the ball over the line.

Minutes later, the Italians took the lead when New Zealander Budd punished Ricky Andrew’s clumsy kick, edging out Jackson in the chase for the loose ball, with Barbieri adding the extras.

Two late penalties from Jackson, who converted seven of his nine kicks, handed the advantage back to Ulster with five minutes left, but they criminally surrendered possession and Budd barged his way over to level.

Barbieri then missed the chance to snatch victory with the last kick of the game as his effort drifted wide.