FIRSTSOURCE TO SPONSOR EVENT AT UK CITY OF CULTURE 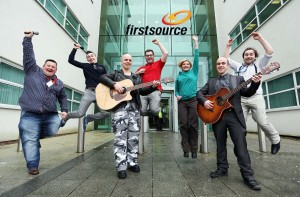 ONE of Northern Ireland’s largest employers has announced its involvement in the UK City of Culture 2013.

Firstsource Solutions, a global Business Process Outsourcer, is sponsoring the singer-songwriter stage at the ‘Music City!’ festival in Derry~Londonderry on June 21st.

The day-long celebration will feature music of all genres on various stages across the city.

Firstsource has four contact centres in Belfast and Londonderry, employing over 2000 people.

Employees based at Claremont Centre and Northland Road, Derry will be involved with the City of Culture activities.

As part of the Music City! event sponsorship, Firstsource will hold a competition in-house to find the company’s most talented musicians.

The winners of the competition will have the opportunity to appear onstage at the Firstsource singer-songwriter stage at Music City! on June 21st alongside well-known local musicians.

“As one of the biggest employers in the Derry area, it is very important that we support the City of Culture,” said Fraida Silver, Marketing Director of Firstsource Solutions.

“Over the coming months, we plan to introduce a number of initiatives to support the culture theme. As well as sponsoring the singer songwriter stage at the Music City! festival and organising our own music competition, we are also planning art exhibitions and encouraging our employees to get involved in City of Culture activities.”

Fraida Silver added; “It’s a great opportunity to involve all of our employees and engage with such an important event for the city of Derry. We have had a huge response already from staff keen to get involved with the City of Culture. There’s a diverse mix of instrumentalists, vocalists and singer-songwriters.

This new sponsorship is the perfect platform to give our employees the opportunity to perform alongside music professionals.”

“Music City! is going to be one of those days from 2013 which people will remember for years and years to come. It’s great that Firstsource has come on board in this way to help us celebrate the longest day of the year in style. Encouraging employees to become involved in City of Culture events is something we want to see happening right across the city.”