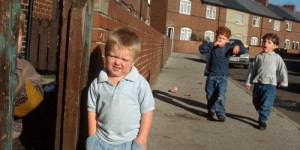 WEST Belfast has the second highest level of child poverty in the UK, according to a new report.

Out of the UK’s 650 parliamentary constituencies, only Manchester Central recorded a higher level of deprivation, according to the End Child Poverty campaign.

It reveals that 43 per cent of children grow up in poverty in West Belfast, slightly down three per cent on the previous year.

During a search of across the UK, Derry/Londonderry and Belfast councils were placed fourth and fifth, with rates of child poverty at 35% and 34% in the respective council areas.

Strabane was the third council in Northern Ireland to be named in the 20 local authorities areas with the highest levels of deprivation in the UK.

North Down was the lowest with 13 per cent.

The charity Barnardo’s – one of more than 100 charities working together in the End Child Poverty campaign – said more needed to be done to take children out of poverty.

It revealed that a child living in west Belfast has recently been diagnosed with rickets, a bone disease that is commonly caused by a poor diet. 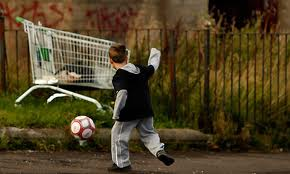 Barnardo’s NI director, Lynda Wilson, said the figures contained in the report were “shocking” and showed that about 100,000 children were living in poverty in Northern Ireland.

“Behind today’s statistics sit the most vulnerable children in society whose life chances risk being compromised by our failure to tackle child poverty effectively,” she said.

“Barnardo’s NI works day in and day out with families in the most deprived areas. The grim reality is that many families face vicious cycles of debt and impossible choices between heating homes or cooking hot meals for their children.”

“We know that children growing up in low income households are more likely to suffer from chronic illness, do less well in education and struggle to find work on leaving school.

“While the Northern Ireland Executive has already undertaken steps to address child poverty with the introduction of a Child Poverty Strategy there needs to be further emphasis on literacy, numeracy and early intervention to address educational underachievement and the introduction of a Child Care Strategy to help families facing financial hardship.”

The report’s authors said one in five children in the UK were classified as living below the poverty line.

The report quotes research published earlier by Save the Children which found that:

• around 1 in 5 parents in poverty (19%) say their children have to go without new shoes when they need them.

• a large number of children in poverty say they are missing out on things that many other children take for granted, such as going on school trips (19%) and having a warm coat in winter (14%).

• only 1 in 5 parents in poverty (20%) say they have not had to borrow money to pay for essentials, such as food and clothes, in the past year.

The authors said that at a national level, the signs for child poverty were “worrying”.

“Even though the latest available national figures showed a fall in relative poverty up until early 2011, because unlike median incomes, benefits were not falling in real terms, this improvement is now reversing,” they warned.

“The Institute for Fiscal Studies predicts a growth in child poverty of 400,000 between 2011 and 2015, and a total of 800,000 by 2020. This prediction came before recent announcements about benefits uprating: the Welfare Uprating Bill currently being debated in Parliament is expected to push another 200,000 children into poverty.”

The campaign has called on the UK government to set out how it will meet its commitment to end child poverty by 2020.

It has also called for action at a local level to address child poverty.