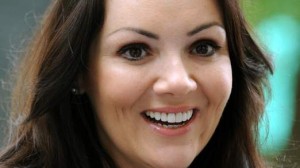 McCutcheon became famous playing Albert Square barmaid Tiffany Mitchell before being killed off in 1998 in a dramatic scene with her on-screen husband Grant, played by Ross Kemp.

She later starred in romantic comedy Love Actually, alongside Hugh Grant, and also had a number one single in 1999 with Perfect Moment.

Other career highlights for the Hackney-born actress include winning an Olivier Award for her role as Eliza Doolittle in the stage production of My Fair Lady.

More recently McCutcheon, who married partner Jack McManus last year, has starred in a yoghurt advert and had a novel called The Mistress published.

KPMG’S David Standish, a joint trustee in the bankruptcy of McCutcheon, confirmed the company was taking control of the star’s finances.

“Ms McCutcheon petitioned for her own bankruptcy at Kingston-Upon-Thames County Court,” he said.

“We are now responsible for administering her estate and are in the process of establishing the individual’s assets and liabilities, the largest creditor being Her Majesty’s Revenue & Customs.”