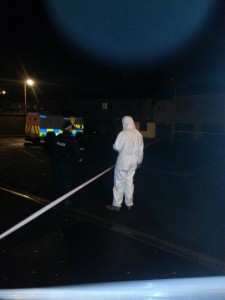 Scene of shooting in Derry’Londonderry on Tuesday night

DISSIDENT republicans are being blamed for a paramilitary style ‘punishment’ shooting in Derry/Londonderry on Tuesday night.

A man was shot in the legs in the nationalist Bogside area.

He has since been taken to the city’s Altnagelvin Hospital for treatment.

The area around the shooting has been sealed off while a CSI team comb the area for clues.