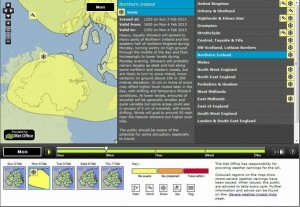 Yellow warning of snow for Monday

THE Met Office has issued a weather warning for Monday with possible disruption to some travel.

The yellow alert of snow will affect higher grounds in Fermanagh, Derry/Londonderry,  Tyrone and Armagh.

The Met Office said: “Heavy, squally showers will spread to many parts of Northern Ireland during Monday, turning wintry on high ground through the middle of the day and then increasingly to lower levels during Monday evening.

“Showers will probably remain largely as sleet and hail along some northern and western coasts, but are likely to turn to snow inland, more certainly on ground above 100 or 200 metres elevation. 10 cm or more of snow may affect higher level routes later in the day, with drifting and temporary blizzard conditions.

“At lower levels, amounts of snowfall will be generally smaller and quite variable but some areas could see in excess of 5 cm of snowfall, with some drifting.

“Winds will gust to around 50 mph near the heavier showers but higher over hills.

“The public should be aware of the potential for some disruption, especially to travel.”