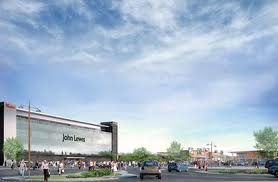 How the John Lewis store at Sprucefield would have looked

NORTHERN Ireland’s struggling economy has been dealt a body blow after John Lewis revealed it was scrapping plans to build a new £150m shopping centre at Sprucefield.

The company confirmed on Friday that their application had been withdrawn, following a decision by Environment Minister Alex Attwood to restrict the scale of the scheme.

Earlier this month Mr Attwood announced this month that the development would have to be limited to stores selling bulky goods.

However, First Minister Peter Robinson said Mr Attwood didn’t the powers to make such a decision and he should have brought it to the round-table Executive for discussion.

The decision by John Lewis has been slammed by local Lagan Valley MP Jeffrey Donaldson MP.

He said there is now “a real danger” John Lewis will build in Dublin instead of in the city of Lisburn, Co Antrim.

Said Mr Donaldson: “This is an absolute disaster for Northern Ireland.

“It sends out a clear message that we are closed for this type of investment.

“There is now a real danger John Lewis will go to Dublin. It will cause huge damage to our retail sector.”

However, the SDLP minister defended his decision.

Mr Attwood said: “The responsibility is to protect existing retail and its thousands of jobs as other retail opportunities emerge.

“Clearly, I want to see other retailers come to Northern Ireland. But in doing so, I have to acknowledge the impact of retail proposals on Belfast and on other towns in the Greater Belfast area.

“The information and evidence provided by my Department to the Sprucefield Planning Inquiry put Belfast First in line with the Executives own Regional Development Strategy 2035 and current planning policy. This information was not provided arbitrarily.

“The information was shaped by agreed strategy and policy, which makes clear that in putting Belfast First, there should be precaution adopted in relation to other retail proposals.”

The initial application for the 500,000 sq ft site was submitted nine years ago.

It included a joint venture between the Australian property firm of Westfield and a local developer, Snoddons.

Those opposed to it said it could devastate town centres, with some calling for it to be moved to Belfast, while backers claimed it would create potentially over 1,000 jobs, particularly at a time when business leaders believe there is little other investment on the horizon.

John Lewis says it has looked at its options but insists that Sprucefield is the only suitable location for new department store in Northern Ireland.

The planning application was due to be considered by the Planning Appeals Commission (PAC), however the companies behind it – known as The Sprucefield Centre Limited – said that they cannot proceed following the minister’s announcement.

A statement said: “This decision follows the Minister for the Environment’s recent announcement that he intends to change the current policy and now confine further development at Sprucefield to bulky goods only, therefore excluding the new John Lewis department store.

“With the deadline looming to submit evidence to the Planning Appeals Commission, The Sprucefield Centre Limited and John Lewis have been forced to accept that the uncertainty over BMAP planning policy means they cannot proceed to Inquiry at this time.”

Local business leaders have urged the company to look at a new town or city centre location.

“We have always strongly supported John Lewis locating a store in a town or city centre site as opposed to an unsustainable out of town location,” said Glyn Roberts from the NI Independent Retail Trade Association.

“Northern Ireland has not only the highest town centre shop vacancy rate in the UK, but twice the national average of nearly 1 in 4 shops empty

“An out of town John Lewis would have accelerated that decline further.

“NIIRTA would urge Westfield and John Lewis to give serious thought to an alternative town centre site which will strongly support regeneration efforts and we call upon the Executive to establish amulti-departmental taskforce to assist them with this process.”