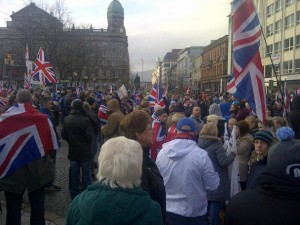 BELFAST City Council is to spend £400,000 to support businesses which have suffered because of Union flag protests.

This is on top of the £600,000 already pledged by the Stormont Executive.

Earlier this week it was announced that the Northern Ireland Tourist Board is to fund a £600,000 advertising campaign under the marketing theme of ‘Back in Belfast’ to encourage people back into the city centre.

The money is being made available through the department of enterprise.

On Friday, the city council agreed to divert £400,000 of its money to assist the campaign.

A total of £150,000 will go towards advertising. According to one councillor, the remaining £250,000 of council money will be spent on a series of events aimed at creating a more “welcoming atmosphere” in the city centre.