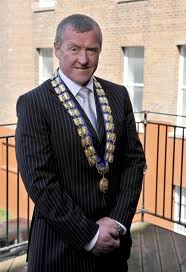 BELFAST Chamber of Trade has asked for all future parades to leave the city centre early on Saturdays to help shop owners.

And it has asked the PSNI to be ‘less visible’ on the streets to reduce negative perceptions of the city.

Chamber President Joe Jordan made the pleas after last week’s urgent crisis meeting with retailers to discuss the impact of the ongoing flag dispute.

Businesses are being urged to sign a petition calling for urgent action to safeguard jobs and trade across the city which was issued as a result of the meeting.

The chamber is now seeking a consultation on the time for all future parades – whether related to the flag demonstrations or not.

“We are setting up another forum for parades organisers – the case that we’ll be putting to them is very much that we’re not interested in the politics behind the parades, all we’re interested in is the timing, particularly on a Saturday,” Mr Jordan explained.

“We would like the organisers of all parades to take providence of the fact that we need Saturday as a good trading day and we would like all parades out of the city centre by 12 o’clock.”

The trade representative is also asking PSNI to “lessen the visual police presence on the streets” and for a tougher prosecution policy to be implemented.

“It was more intimidating, the sight of police in all their riot gear than the protest itself,” he continued.

“I’m not telling Matt Baggott how to do his job, all I’m asking for is the visual aspect is toned down a bit so that people don’t feel intimidated by the fact that there’s riot squads lining the streets.”

Urgent investment of funds to promote the Belfast, debt management policies for struggling businesses, and transport initiatives to attract more people are urged for in the petition.

It has been estimated that £15m was lost in sales over Christmas, with some pubs reporting trade down as much as 50%.

Mr Jordan said: “It’s fair to say that Belfast was one of the worst places affected by the protests, our figures are demonstrated and show clearly what affect the protests were having on trade,” he said.

“There is no doubt that Belfast businesses are facing unprecedented challenges that threaten the lifeblood of our capital city, which is the gateway to Northern Ireland for most of our tourists.

“We are calling for all industries in Belfast to get behind this petition and sign the document. This is a chance for businesses to strengthen the call for all issues affecting their business.”

The chamber will present the petition to local and central government next week.

Efforts have been ongoing by business representatives to bolster the economy against the backdrop of weeks of flag protests.

On Wednesday, it was announced that the NI Executive will be providing £600,000 to support a major marketing campaign promoting the city’s hospitality and retail sectors.

The advertising campaign is expected to start next week