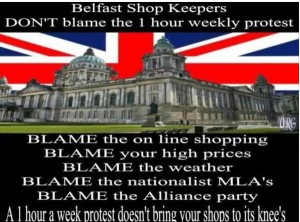 THEY stayed away in their droves over Christmas as Belfast was in the grip of the Union flag protest.

Now in an effort to win them back, the hospitality and tourist trade are launching a major marketing campaign to boost Belfast’s nightlife.

But on Tuesday night loyalist protestors hit back at the campaign claiming a “one hour weekly protest” didn’t ruin their Christmas.

January and February are normally a quiet month for the hospitality trade which is why a good Christmas at the tills is vital for pubs and restaurants.

But with protestors taking to the streets over the Union flag row, shoppers and revellers stayed away from Belfast.

It resulted in a poor Christmas for the licensed trade and also the retailer sector, with losses put at around £15 million.

Pubs and restaurants have been running promotional campaigns, meal deals and hotel bedroom offers to try and get bodies through the doors and spend their hard earned cash.

Now marketing campaign is to be rolled out in an effort to give a shot in the arm to businesses downin takings.

It is got the backing of Gary Lightbody of Snow Patrol.

The title of the band’s hit song ‘Take Back The City’ became a battle cry among revellers, pubs, restaurants on Twitter to reclaim Belfast from the protests.

And to show a united front, groups representing the hospitality and retail sectors, met with Ministers from the Northern Ireland Executive seeking their support for the ‘Backin Belfast’ campaign. 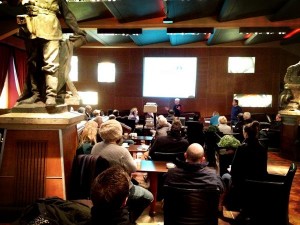 Bodies representing the hospitality and retail sectors, which employ up to 35,000 people in Northern Ireland, met with Executive Ministers on Tuesday to call for their support for the ‘Backin Belfast’ campaign.

They are seeking to secure close to £1m from Belfast City Council and the Executive.

Campaigners say they are aiming to counter the impact of disruption attributed to flag protests, which they say have diverted shoppers and revellers from the city over the past two months.

It has been estimated that £15m was lost in trade over Christmas, with some pubs reporting trade down as much as 50%.

At least 50 jobs have already been lost across 16 premises, with a further 300 at risk.

But counter-campaigns such as ‘Operation Sit In’ ‘Takebackthecity’ and ‘Backing Belfast that began on social media have urged the public to get out and enjoy themselves while supporting the hospitality industry.

“We have been greatly encouraged by the level of support we received today and we welcome all discussions focused on providing immediate support for the Belfast business community,” the industry representatives said in a statement.

“Each Minister has stepped up to the plate and vowed to look at ways to help traders and retailers get through this difficult time.

“We have made significant progress and a number of options are currently being explored, including a commitment to provide an immediate marketing campaign and mechanisms to help cash flow for businesses worst affected.

“Overall, it is clear that there is a shared commitment to urgently helping the local business community, and this is something that we will continue to drive forward.”

It has been a very difficult time for the industry in Belfast, but the time has come to remind people that the city is very much open for business.

Colin Neill, Pubs of Ulster Chief Executive, said: “Proprietors across the city have pledged their support for Backin Belfast and will be offering special incentives and deals to help attract customers.”

The campaign will rely heavily on a marketing campaign and social media.

Gerry Lennon, Chief Executive of Belfast Visitor and Convention Bureau, said: “This campaign will help to promote Belfast for what it is – a fantastic place with the finest hospitality, a great retail offering and an unbeatable choice of visitor attractions and entertainment venues.

“Our businesses want everyone out and in the city, supporting ‘Backin Belfast’ campaign. We’ve plenty to offer – and plenty on offer – let’s get out there and enjoy it.”

He claimed that many have already engaged with the #backinbelfast hashtag, with already 1.2 million tweets.

Stephen Magorrian, Chair of the bureau and Managing Director at Botanic Inns, which own 15 bars in Belfast, said: “Thousands of people and their families rely on Belfast’s hospitality, entertainment and retail businesses for employment, to sustain livelihoods as well as contributing to our local economy.

“I was very encouraged by Saturday night, I was out on Saturday night and Friday night, there were a lot of people in the city saying to me that they came in because of the campaign,” he said.