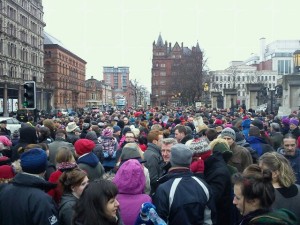 A peace rally has been held in Belfast 24 hours after the city saw some of the worst violenc since the Union flag dispute started last month.

A crowd of up to 1,500 gathered at city hall to make noise, which they hoped would allow their voice to be heard.

People of various ages and from different sections of the community clapped, cheered and blew whistles as part of a collective din at 12.55pm on Sunday.

Organisers said they wanted to “To stand shoulder with those who faced violence and intimidation and make some sort of statement to those who would listen that our differences should be resolved through democratic means.”

“People I’ve spoken to today say they wanted to turn out today to stand for a new Belfast and to stand for peace,” said UTV reporter Judith Hill.

Last month crowds joined hands around the city hall and in another event in December a non-silence was held at the same site.