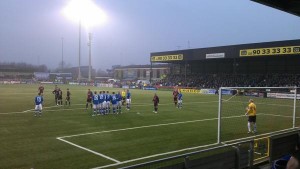 Free kick to Crusaders on the edge of Linfield box

STEPHEN Baxter will be a relieved manager after his team twice came from behind to share the spoils with Linfield.

Billy Joe Burns put the Blues ahead with a sweet volley much to the joy of the travelling Linfield fans.

But with almost the last kick of the first half Gary McCutcheon equalised during one minute of added time.

It was all to play for in the second half.

Linfield went up when Lowry was pulled in the box and Brian McCaul converted from the spot.

However, five minutes later McCaul was booked for a foul.

Crusaders then went down to ten men when Jordan Owens was sent off for what the referee said was an elbowing incident.

A win for Crusaders would have cut the gap with Cliftonville to four points.

And a win for Linfield would have raised their spirits before their Boxing Day clash with Glentoran.