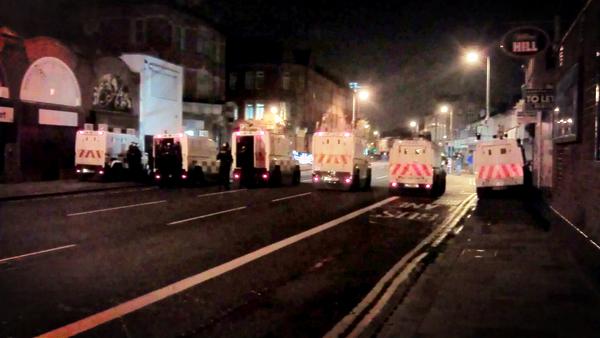 Police in riot gear on the Albertbridge Road on Monday

All available police resources are being mobilised as protestors want to bring the province to a standstill to drive home their anger at removal of the Union flag from Belfast City Hall.

So far 60 protests are planned, many of them in the Greater Belfast area.

Northern Ireland has been peaceful since Monday when missiles and paint bombs thrown at PSNI in Sandy Row.

Police also came under attack on the Newtownards Road in east Belfast.

The protests are being co-ordinated as part of ‘Operation Shutdown’, a plan by loyalists to bring streets, roads, towns and cities to a standstill to show their anger at the council’s decision to fly the Union flag on Belfast City Hall on 17 designated days.