NO POT LUCK FOR BURGLAR AS POLICE UNEARTH HIS CANNABIS FACTORY 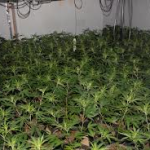 A SUSPECT burglar got more than he barganed for in a shopping when he cops ended up smashing his very own cannabis factory.

Police probing a house break-in arrested an 18-year-old man on suspicion of burglary, at a shopping centre on Longwood Road, Newtownabbey, Co Antrim.

In a follow-up operation on Friday morning, officers raided a house in the Merville Garden Village area as part of their inquiries.

There they found a cannabis factory and plants with a street value of around £10,000.

The suspect was arrested on suspicion of burlgary offences, possession of cultivating cannabis contrary to the Misuse of Drugs Act and is in custody.