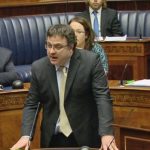 A high profile PSNI presence in Bangor on Monday night may have thwarted the planned attack on the MLA’s Abbey Street premises.

A device was thrown in the general area of Abbey Street on Monday at around 9.45pm and no damage was caused, a police spokeswoman confirmed.

Searches were conducted by police in a nearby wooded area where the other petrol bombs were discovered.

Alliance MLA Stephen Farry told the Assembly on Tuesday morning that the party’s Bangor premises were the target.

“I’m extremely grateful to the Police Service of Northern Ireland for intervening and from stopping the attack from getting any worse.

“But given that this was an office of the Northern Ireland Assembly, I think it’s important that we put it on record.”

Dr Farry’s office was previously targeted last Wednesday when an attempted arson attack was carried out.

The same night the home of two North Down Borough Council councillors was hit with  paint bombs in Bangor West.

Police investigations into both incidents are continuing.