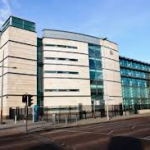 In a separate case, the riot charge against another 19-year-old man was withdrawn due to a lack of evidence linking him to trouble near Rathcoole.

It emerged that his legal team had also brought emergency High Court proceedings on Sunday to challenge the case being made against him.

Meanwhile, a 13-year-old boy, three aged 14, a 15-year-old and another, aged 16, have appeared before Belfast Youth Court on rioting charges.

They were all granted bail, but also banned from going near any future protests.