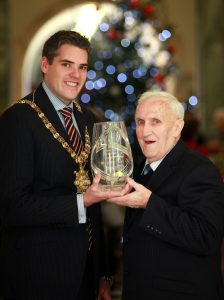 IT pays to listen – as 88 year old Tommy Stewart has found out after 35 years of sterling service as a befriender with Niamh`s Bracken, Beacon Day Support Centre in east Belfast.

He has been chosen as the winner of Belfast City Council`s Older Volunteer of the Year Award 2012, and was presented with his award at a ceremony in City Hall today.

The Lord Mayor, Alderman Gavin Robinson, who presented the award said: “Beacon Day Support Centre works with adults with mental health needs and for the last 35 years Tommy has provided a non-judgemental listening ear for service users, supporting them through their difficulties.

“This award is to highlight the contribution that older people provide in a society that too often writes them off, ignoring their service and experience.

“You really are a beacon in east Belfast and I am delighted to see your service recognised and rewarded,” he added.

“I also want to congratulate all of our older volunteers in the city, those here today and those who continue to work quietly behind the scenes, their contribution as yet unrecognised. Thank you,” said the Lord Mayor.

Emma Bailie who nominated Tommy for the award said he is “a wonderful, compassionate, empathetic, generous and committed volunteer whose care, enthusiasm and passion for volunteering with mental health service users knows no bounds.”

This is the second year of the Older Volunteer Award scheme which is supported by Volunteer Now through The Atlantic Philanthropies.

Councillor Bernie Kelly, who chairs the council`s all-Party Reference Group for Older People said it was good to see the wide range of organisations across the city nominating their older volunteers for the award.

“It is obvious from the nominations received that each volunteer is held in the highest esteem by the organisation they work with and that can only have positive repercussions for older people,” said Councillor Kelly.