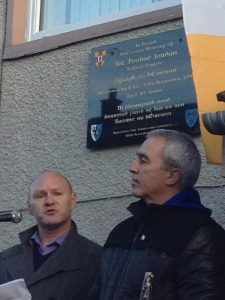 A RALLY has been held on the 20th anniversary of the shooting dead of IRA man Pearse Jordan by an elite police unit.

Said the MP: “I was honoured to speak at the Pearse Jordan commemoration today. 20 yrs on and the quest for justice continues.”

His parents Hugh and Teresa Jordan have fought a 20 year battle to get to the truth of what happened the day their unarmed IRA son was gunned down by the RUC.

Pearse Jordan, 22, was shot dead by the RUC’s elite HMSU unit on the Falls Road in west Belfast on November 25, 1992.

Jordan had been driving a stolen car when it was rammed off the road by a HMSU unit led by sergeant `A`.

As Jordan exited the car and tried to run away he was hit by three shots fired by `A`.

He was fatally wounded and died a short time later.

At an inquest last mont, Sergeant `A` claimed that he’d opened fire when Jordan had turned towards him convincing the policeman that he was about to open fire. 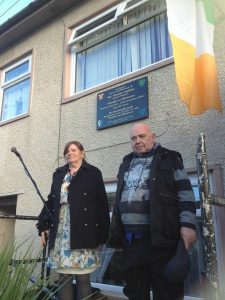 Hugh and Teresa Jordan at rally outside their home

However it quickly emerged that Jordan was unarmed and had been shot in the back while trying to escape.

In 2001 the European Court of Human Rights ordered the British government to pay compensation to the dead man’s family after it ruled that inquest procedures into the killing were flawed.

In 2002 a legal challenge taken by the Jordan family resulted in the Lord Chancellor amending the law to compel soldiers and police officers responsible for lethal force shootings to attend inquest hearings.

The Jordan family campaigned for an inquest into the killing for nearly 20 years before a hearing officially opened last month.

‘A’ has since given evidence, despite having previously refused to take part in proceedings for nearly a decade.

The officer, who now lives abroad, said that he had previously refused to attend inquest proceedings since 2004 because of fears that his identity would be revealed.

A number of police officers involved in the fatal shooting have been granted anonymity.

`A` had failed to attend the inquest when called as a witness earlier in proceedings, but unexpectedly appeared last month to give evidence.

According to The Detail, the only media to cover the inquest, ‘A’ was questioned by the Jordan family’s barrister Barry MacDonald SC (instructed by Madden & Finucane solicitors), as to why he had only now chosen to give evidence, he said:

The court was told `A` joined the RUC in 1973 as a 23 year-old and was promoted to sergeant five years later.

In 1980 he joined the RUC’s Special Support Unit (SSU), an elite uniformed team which was trained by the SAS.

The court heard that ‘A’ had been chosen for the unit because of his calmness in dangerous situations and how he had taken part in hundreds of anti-terror operations and had been the leader of an RUC sniper unit as well as having trained VIP bodyguards.

On 25 November 1992 `A` had been the leader of a HSMU unit in west Belfast tasked to support a surveillance operation against a suspected IRA bomb factory at Arizona Street.

HMSU had a number of vehicles, including a red Ford Orion driven by Jordan, under surveillance. 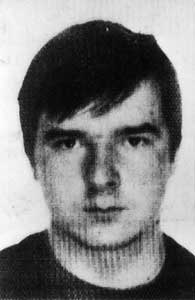 His unit had been tasked to stop the Orion as it drove along the Falls Road under the pretence that its rear brake lights were not working.

`A` told the court that when his unit attempted to stop the car Jordan had sped off and a high speed chase ensued, ending when the police car rammed the Orion off the road.

Seconds later Jordan got out of the car and tried to run away across the Falls Road.

`A` claimed that he’d shot Jordan when he turned as he was running away and he feared he was going to shoot him.

However forensic evidence later showed that the 22 year-old was unarmed and – contrary to police accounts – had his back to `A` when he was shot.

When `A` was asked by Mr MacDonald if HMSU units had been trained to shoot to kill rather than to shoot to try and disable a suspect, he said:

“Yes if you want to put it that way.”

Questioned if he had thrived on being involved in dangerous situations during his career, he replied: “It was my job.”

Asked whether he had been at the “peak of his powers” as a police officer at the time of the Jordan shooting, he said: “I couldn’t possibly answer that.”

The inquest was told that `A` had described himself as one of the most experienced and capable armed police officers in western Europe in a personal profile which had been requested by then RUC Chief Constable Sir Hugh Annesley following the Jordan shooting.

When asked why the chief constable had sought a personal history of his police career, `A` said: “I’ve no idea.”

The court was told how `A` had been placed on administrative duties while an investigation into the fatal shooting was carried out.

Asked why he’d told an RUC doctor in 1995 that his job had been “great until the ceasefire”, he replied: “I don’t know, because it was.”

He also admitted to the doctor that he’d become “irritable” in his home life following his enforced removal from operational duties.

He said that events prior to the shooting had involved a high speed car chase, which resulted in police ramming Jordan’s car, believing it was transporting a bomb into Belfast city centre.

“I got out and reacted in a flash,” he said, adding later, “maybe you needed to be there.”

He described the Jordan incident as one of the worst professional experiences of his career, but denied that he had been wrong to the shoot an unarmed man.

“When he turned around I couldn’t see his hands and I thought my life was in danger.”

Challenged by Mr MacDonald that the threat to his life could only have been perceived rather than real, `A’ replied:

“I was assuming at the time he was going to raise his hands with a weapon.”

As part of his elite training `A` had taken part in live weapons exercises, which involved firing at pop-up cardboard figures of armed terrorists as well as unarmed civilians.

Questioned as to whether shooting an unarmed man would have been accepted in training sessions, he admitted: “I would have been marked down for it, because I probably shouldn’t have.”

He went on: “I agree with you, in a training situation, in a pop-up cardboard target, I possibly might not have done that.”

However he rejected Mr MacDonald’s accusation that he had acted recklessly by opening fire on a busy road with civilians in the immediate vicinity.

“No that’s wrong. You keep bringing up my involvement in hundreds of anti-terrorist operations. You can’t have it both ways.”

A` had claimed that his vision of Mr Jordan’s full torso had been blocked by the police car from behind which he had opened fire.

However evidence from forensic experts suggested that the position of spent cartridges and entry wounds on the body meant that `A` had in fact fired from the rear of the car with a clear view of Mr Jordan.

When challenged with the RUC’s own Code of Conduct, which states that an officer should not open fire on an individual if the officer only suspects that the target is armed, `A` replied:

“The people who wrote this are like your Mr Boyce (forensic expert), they weren’t there that night.”

Recalling his emotions when first informed that Jordan had been unarmed and had not been transporting explosives, he said:

“I knew I was going to have to answer for my actions.”

He denied that he had discussed the shooting with two other HMSU officers as they returned to a police station shortly after the incident.

“That just wasn’t the conversation we were going to have.

“It was obviously a very serious incident and was something which was going to be the subject of an investigation.”

The inquest was told that `A` had failed to mention that he had shot an unarmed man when he wrote an account of his actions that day in his police notebook, simply recording a “serious incident on Falls Road”.

“Yes I had a notebook,” later adding, “but I didn’t make an entry because I didn’t like writing things down which (a) I might lose or (b) might fall into the wrong hands.

“So I kept it as brief as possible.”

The inquest was told that `A` had failed to mention the fact that he had felt his life was in danger during a HMSU briefing which took place at the police station an hour after the shooting.

Despite his HMSU commander instructing him to go home `A` remained in the police station for six hours after the shooting.

“I can’t explain that particular reason why I didn’t want to leave the building,” he said.

Questioned whether he had been in a relaxed state after the shooting, he replied:

“Possibly at the time I thought I was.”

In a dramatic turn of events the jury at the inquest told coroner Brian Sherrard that they could only agree on some basic answers surrounding the incident, but remained at a `stalemate` over the key questions surrounding the shooting itself.

“At this point in time there is a mindset (and) we’re not going to get by it,” the forewoman of the jury told the coroner.

The Jordan family’s barrister, Barry Macdonald SC (instructed by Madden&Finucane solicitors), said that any attempt to accept a partial decision by the coroner would be “quite wrong” and would “masquerade as a verdict“.

However the coroner rejected Mr Macdonald’s application that the jury should be dismissed and another inquest begun.

Instead Mr Sherrard said he would accept the limited findings of the jury, despite the jurors being unable to agree on the key issues as to how Mr Jordan was killed.

It is understood the decision will now be the subject of a judicial review.