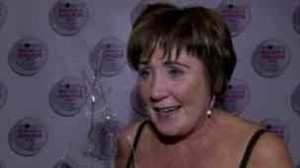 THE Women in Business Northern Ireland  Awards named its new winner last night at a gala ceremoney in Belfast.

The title of Outstanding Businesswoman of the Year was presented to textiles entrepreneur Patricia Clements.

Mrs Clements started making aircraft seat covers in the mid-1990s and now her Rostrevor-based firm, Bradfor Ltd in Co Down supplies products to major airlines across the world.

The family-run business employs almost 100 staff.s now in its second year and the organisers said attendance has increased by 25%.

The guest speaker was one of the UK’s most successful businesswomen – the Scottish lingerie tycoon Michelle Mone.

The award for Best Young Businesswoman of the Year was presented to a 28-year-old Belfast estate agent.

The organisers said Kelly McAllister of Lough and Quay Estate Agency has “used her versatility, tenacity and perseverance to build her business in a turbulent sector over the past five years”.

The Queens University graduate launched her firm in January 2008, shortly after the property crash began.

Awards were also presented in areas such as management and leadership, innovation, marketing and customer services.

Roseann Kelly, chief executive of Women in Business NI, said: “Showcasing the best of what Northern Ireland business women have achieved in the past 12 months, these awards have grown in attendance by 25% on our inaugural awards last year.

“Such an increase in attendance proves to me how vitally important it is to celebrate and recognise those at the cutting edge of our economy, in what can only be described as the toughest of trading times in recent history.”

Tracy Meharg from Invest Northern Ireland said the awards represented “a platform to showcase the innovation, leadership and contribution women are making to drive business development and growth across Northern Ireland”.

Now in its second year, the awards has send a 25 per cent increase in the number of people taking part.