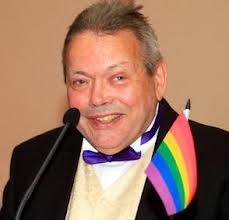 P A Mag Lochlainn who has died after a long illness

A GAY rights campaigner who once claimed that Jesus was a “homosexual” has died.

P A MagLochlainn died after a long term illness and will be buried this weekend.

Tributes have been flooding in from politicians for the late gay rights activist.

Mr MagLochlainn was a member of the SDLP and volunteered in the Mid Ulster area before moving to south Belfast.

He was the first openly gay representative in a Northern Ireland political party’s executive.

Mr MagLochlainn was a prominent activist and was president of the Northern Ireland Gay Rights Association for over 20 years.

Last year he was presented with an award from Belfast Pride for his years of dedication to the gay rights movement.

Five years ago he provoked outrage from the DUP after he said he believed Jesus was gay.

In a debate with DUP councillor Christopher Stalford, P A told BBC Radio Ulster: “I believe that a 33-year-old unmarried rabbi living in Israel, in the time that he was living and having a favourite friend among the apostles called John, was quite clearly a gay man.

“I am entitled to that belief as a gay Christian. Christ, if he were alive today, would be on the parade with us, on the side of the underprivileged, not standing superciliously at the side looking on like Christopher.”

SDLP Foyle MP Mark Durkan expressed deep sadness at the death of his party colleague and friend of 30 years.

“PA had a warm good nature, deep empathy and an extensive interest in public affairs and world events,” he said.

“He brought acute logic to his analysis and wry humour to his argument. He believed passionately in education, democratic debate, respect for diversity and human rights.

“He gave a proud and distinctive contribution to the cause of gay rights and brought that same articulate understanding to challenge other prejudices and injustices as well.”

He continued: “While resolutely proud in every aspect of his own identity he used self-deprecating humour and disarmed the presumptions of others with sensitive understanding wrapping his unapologetic logic.

“PA was a committed political activist who deplored violence and the denial of any human right. He was a great campaigner and he was great company.”

Mr Durkan extended his sympathy to his partner Barry and the MagLochlainn family.

Michael Wardlow, Chief Commissioner of the Equality Commission for Northern Ireland, also paid tribute to Mr MagLochlainn and expressed his sympathy to his family.

“He championed the rights of gay people before there was legislation in place to protect those rights and made an important contribution to the improvement of the lives of many people in Northern Ireland,” he said.

“The passion he demonstrated throughout his life motivated me to battle for a shared society inclusive of all regardless of sexual orientation,” he said.

“His tireless work and the respect that so many had for him will be his legacy.

“He showed a lot of courage and was very outspoken on the issues that mattered most to him. I hope that future generations will be inspired by him.”

His remains were at O’Kane’s funeral parlour in Donegall St this afternoon from 3pm onwards for people to pay their respects.

His funeral will take place in his hometown of Dungiven, Co Derry on Saturday.