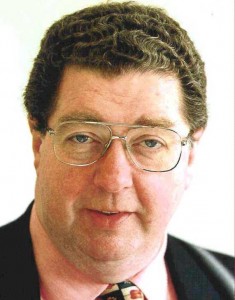 The group, who call themselves ‘The IRA’, claim they shot the father-of-two dead because of “torture and degradation” of dissident republican prisoners in Maghaberry jail.

But Chris Ryder, who covered the Troubles for both The Sunday Times and Daily Telegrpah, said The Irish News was wrong to run the story on its morning front page.

Mr Ryder added: “No wonder journalism and the media are held in such low public esteem.

“What The Irish News has done is propaganda not journalism.

Mr Ryder is an acclaimed author, writing books on the late Gerry Fitt, the Army Bomb Disposal Unit and the RUC.

‘The IRA’ grouping was formed in July following the amalgamation of the Real IRA, Derry-based Republican Action Against Drugs (RAAD) and an independent unit based in the mid-Ulster area.

In its statement to The Irish News, ‘The IRA’ said: “On Thursday, November 1, 2012, an active service unit of the IRA executed prison guard David Black. 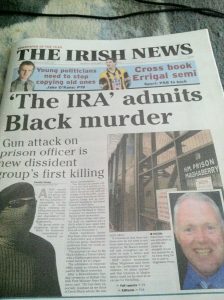 “While the IRA never take this type of action lightly, the IRA has a responsibility to protect and defend republian POWs (prisoners of war).

“This action was in direct response to the torture and degradation of POWs held in Maghaberry.

“The issues that led to the IRA taking action might have been avoided if his ‘superiors’ had honoured the agreement they signed with prisoners in August 2010.

“Rather than showing the leadership leadership necessary to resolve the protest in Maghaberry they continue to play politics with the lives of republican POWs and indeed their own guards and PCOs (Prison Custody Officers).”

BELFAST DAILY reported at the time of Mr Black’s murder that the gun attack had a two-pronged purporse.

A dissident republican source told us that it was carried out over the treatment of prisoners in Roe House and also to boost their morale.

Mr Black, a father-of-two, was driving from his home in Cookstown, Co Tyrone to work at Maghaberry jail when he was ambushed on the M1 outside Portadown.

His Audi A4 careered down and embankment but police believe he was already dead from the high velocity rounds.

The murder was widely condemned both locally, nationally and internationally. He was the first prison officer to be murdere in almost 20 years.