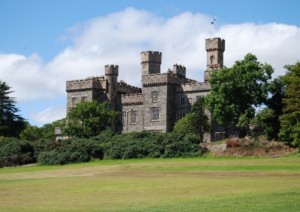 A DARK cloud hangs over the refurbishment of an historic Scottish castle after Patton construction went into administration.

But a Scots building boss is vowing to save 15 jobs and carry on the renovation work at Lewis Castle in the Western Isles despite the Ballymena company’s financial woes.

Earlier this year, Patton’s won a £2 million contract from Comhairle nan Eilean Siar for the first stage of renovations to transform the 19th century castle – built for Scots heroin baron Sir James Matheson – into a museum and small hotel.

They were awarded the work despite making a £17 million loss in the last two financial years.

Belfast Daily revealed earlier this week staff fears of job losses and the stark prospect it was about to go into administration.

The company refused to comment on questions posed by Belfast Daily.

All it would say that it was working with its bank to “navigate their way” its financial problems.

Less than 24 hours later, staff fears were realised with administrator Tom Keenan was called in to stop the 100-year-old firm from going to the wall.

And by Friday, he announced that 190 of the 320 jobs were to go, just five weeks before Christmas.

Mr McKay said he had already written off £400,000 which his firm has already spent on the project in Stornoway and fears jobs are in jeopardy.

But he said he would fight to save the employment of 15 workers.

The managing director said: “We are owed around £400,000, but my desire is to continue working on the site.

“I was about to lay off 15 guys today, but am keeping them on for another week at my own expense in the hope that we can take over the project.

“If Patton went into liquidation that would make it easier.

“We bid for the original contract and came a close second. We are now carrying out all the work as sub-contractor, so can take over easily.

“If I was able to take on the job myself then that would save the workers’ jobs. I am in discussions with various people about this.”

He added: “Patton has been paid nearly £1million, but they have not passed ony of that on to us. I won’t get the money back.

“We are £400,00 worse off but it doesn’t leave me insolvent, bankrupt or in a position where I can’t pay my bills next week.

“It’s going to set me back a few years, but we carry on as normal. But if I can’t take this job over then we will have to lay off these guys.

Mr MacKay claimed he was surprised that Patton’s were able to win the contract as he himself had submitted a “very keen” tender.

The Northern Ireland firm only had one full-time employee left on the island.

Patton’s were part of the FMP consortium that was responsible for the construction of six schools in the Western Isles at a cost of £60 million.

All six have now been built, though some work requires to be completed.

Neil Patton, chairman of Patton Group, said: “This is a very sad day for everyone connected to this family business and the communities we have served for the last 100 years.

“Administration became inevitable because of the general downturn in the building sector, pressure on margins and the resultant impact on cashflow.”

A spokesman for Comhairle nan Eilean Siar said: “The comhairle is seeking early discussions with the administrators, Keenan CF, to get a clear understanding of the position and of their plans.

“Once we have further information from the administrators we can assess the options open to the comhairle and the best way of taking forward the castle project.

“We have contacted our partner organisations on the castle — HLF and Historic Scotland — to keep them informed of developments.”

Lews Castle was built in the years 1847-57 as a country house for Sir James Matheson, who had bought the whole island a few years previously with his fortune from the Chinese Opium trade.

In 1918, the Lewis estate including the castle was bought by industrialist Lord Leverhulme from the Matheson family. He gifted the castle to the people of Stornoway parish in 1923.

During WWII the Castle was taken over as accommodation for air and ground crew of British forces.

After the war, the Castle was also used for accommodation for students of Lews Castle College, which is located in the grounds.

Today the building is owned by the local council and is category A listed building.


One Response to REVEALED: SCOTTISH CASTLE REFURB IN DOUBT AFTER PATTON CONSTRUCTION GOES INTO ADMINISTRATION