WE SHOULD WALK OUT OF EXECUTIVE AND GO INTO OPPOSITION, KELLY TELLS SDLP PARTY CONFERENCE 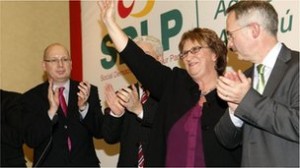 DOLORES Kelly threw down the gauntlet to her SDLP party conference tonight and told them: Staying in government is blackening our name.

The deputy leader told delegates gathered in the Armagh City Hotel her party should be thinking about going into opposition at Stormont – but not right away.

The Upper Bann MLA says her party is being tarnished by the failures and behaviour of the DUP and Sinn Fein.

She said the SDLP would “lose a few jobs by leaving government but could lose its soul” if it stays.

Questioning whether the SDLP should go into opposition the Upper Bann MLA said the party must think about its options.

She said the party should not “walk out of government next week or next month” but should be thinking about where all this is going.

She also questioned whether the party needed “more freedom to act “.

The environment minister Alex Attwood is the party’s sole member of the Executive.