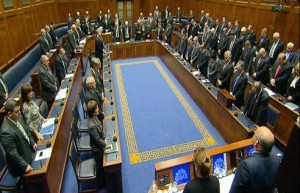 Cross party MLAs all rose and stood heads bowed to observe silence for 60 seconds this morning for the slain grandfather.

The minutes silence was held as detectives probing the dissident republican murder of the prison officer regrouped this morning in an effort to catch his killers.

It follows the release unconditionally last night of senior Continuity IRA leader Colin Duffy from custody after 48 hours in detention.

He and another man from Lurgan were arrested in dawn swoops in Lurgan on Friday morning by the PSNI’s Serious Crime Branch.

Duffy, 44, and the 31-year-old other suspect were taken to the Antrim Serious Crime Custody Suite for questioning.

This morning, the senior investigating officer in the murder case, Detective Superintendent Keith Agnew will bring his team of detectives together for a major briefing.

Sources said the meeting will focus on where the investigation currently is and where it needs to go.

“It is a matter of now regrouping and taking stock. All the intelligence that has come will in will have to be gone through to make sure nothing has been missed,” said a source.

“Then the forensics will have to be rigorously looked at. This will be the key to arresting suspects and securing charges.”

Prison officer David Black, 52, was shot dead on a motorway on Thursday as he was driving to work at Maghaberry jail.

Gardai are still questioning a 29-year old man at in Carrick-on-Shannon police station following his arrest on Friday in Co Leitriem.

The murder of Mr Black, a married father of two, brought local, national and international condemnation.

On Saturday, US Secretary of State Hillary Clinton said the murder of prison officer David Black was an outrageous and cowardly act.

Mr Black was shot on the M1 on Thursday morning as he drove to work at Maghaberry jail.

Mrs Clinton said the US was resolute in its support for Northern Ireland’s embrace of peace and reconciliation.

Mr Black’s funeral will take place tomorrow at Molesworth Street Presbyterian Church where he was a regular Sunday worshipper.

The Crimestoppers charity has offered up to £10,000 for information leading to the conviction of those responsible for the 52-year-old’s murder.

Mr Black, from Cookstown in County Tyrone, was driving to work when a car pulled up beside his vehicle on the motorway in County Armagh and fired a number of shots. His car veered into a ditch and he died at the scene. 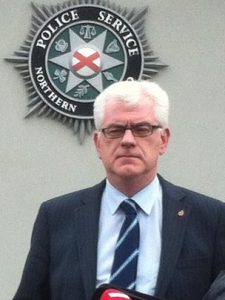 On Friday, the senior officer investigating the murder, DS Keith Agnew, appealed for information about the movements of Mr Black’s car and that of his killers.

Mr Black, a father-of-two, was the first prison officer to be murdered in Northern Ireland in almost 20 years.

He was the 30th prison worker to be murdered by paramilitaries since 1974 in Northern Ireland.

The last prison officer to be killed was Jim Peacock who was shot dead by the UVF.