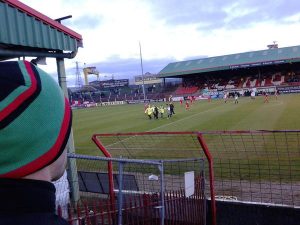 IT WAS  dramatic afternoon at the Danske Bank Irish Premier League with Crusaders burying Glenavon 5-1 at Seaview.

Cliftonville scraped a point at the Oval and Linfield are starting to build momentum with a 3-0 win away to Donegal Celtic.

But the most dramatic event of the afternoon literally fell to ref Arnie Hunter who was officiating at the Oval where Glentoran hosted Cliftonville.

At first it looked like the referee had been struck on the side of the head by a rifling football.

However, a replay of the incident showed Hunter was in collision with a player and was left floored on ground.

His head injury was so bad that he couldn’t continue and he had to be stretchered off to be replaced by the fourth official Ian McNabb.

It meant that there was eight minutes of extra time and in almost the last second of the game Cliftonville player Smith was booked for a second time and was sent off. No sooner was Smith off the pitch than the referee blew the final whistle.

Liam Boyce spared the Reds blushes with a late equaliser and could be worthy of call up next week to the Northern Ireland team with six goals in his last six games.

Coleraine missed out on going second with a 1-1 draw at home to Ronnie McFall’s Portadown team.

The Ports took the lead throug a Murray penalty on 30 mins but Curtis Allen secured a point with a 73rd minute header, his eight of the season.

But Coleraine will look upon this as two points lost as tried to keep in touch with Ballinamallard and Cliftonville.

Donegal Celtic manager Pat McAllister was hoping his team could get him a second straight after taking over the helm for a second time.

However, despite good defending, it wasn’t to be and Linfield ran out 3-0 comfortable winners with goals from McAllister, Thompson and Mulgrew.

After 14 games, Cliftonville are stil the team to chase who are top of the table three points ahead of Ballinamallard.

Coleraine and Crusaders are tied on 26 point, while Ballymena are in fifth just ahead of Linfield who leapfrogged Glentoran.