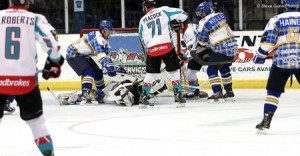 THE Stena Line Belfast Giants bagged another two points in the Elite League standings last night to stay in touch at the top with a 5-1 victory over the Fife Flyers at the Odyssey Arena.

The home team started the game quickly and went 2-0 up within nine minutes , Craig Peacock linked up with Greg Stewart to open the scoring and then Robbie Sandrock doubled the score after great work from Mark Garside and Darryl Lloyd.

Fife silenced the home support five minutes into the second period when Casey Haines fired the puck past Stephen Murphy to make the score 2-1 .

A second goal from man of the match Robbie Sandrock on a Giants power play settled the nerves and a further power play strike and first goal of the season, this time from Jeff Mason, made the score 4-1 .

Dayman Rycroft scored the only goal of the third period with the assists going to Andrew Fournier and Matt Towe.