FLIGHTS FROM BELFAST TO NEW YORK OVER RAVAGING HURRICANE SANDY 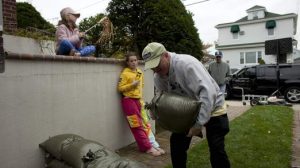 Residents roll out sand bags ahead of Hurricane Sandy

FLIGHTS to and from New York have been cancelled today as Hurricane Sandy rolls in to batter the east coast of America.

All flights from Belfast and return flights from New York have been suspended over fears that Hurricane Sandy will tear through the state.

Over 400,000 people have been told to evacuate from New York as the massive hurricane is preparing to hit the east coast.

And New York’s underground system – the largest in the world – has also been suspended, hitting hundreds of thousands of commuters.

Even trading on the floor of the New York Stock Exchange has also been suspended ahead of the worst hurricane to hit America’s east coast.

Sandy is on a collision course with two other weather systems leading to fears it could develop into one of the worst storms on record in the US.

The superstorm is threatening up to 50 million people on the heavily populated east coast, and forecasters say it could wreak havoc over 800 miles (1,300 kilometres) from the Atlantic coast to the Great Lakes.

Sandy, a Category 1 hurricane, is currently about 470 miles south east of New York City. It is expected to make its way inland tonight, hitting Atlantic City in New Jersey before crossing through Pennsylvania.

The massive storm, which is hundreds of miles across, is set to hang around until at least mid-week with flooding rains and Appalachian snow becoming the main concerns then.