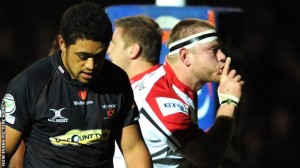 After a shaky start, and with less than ten minutes on the clock and, going down 6-0 early on through Tomy Prdyie penalties, Ulster soon found their rhythm.

Tom Court pulled the visitors back with a try on 15 mins and Ruan Pienaar converted to put Ulster ahead 7-6.

A minute later Prydie had the golden opportunity to put the Dragons ahead but he missed his penalty.

And then it was the turn of Ruan Pienaar to miss two successive penalties.

His first penalty on 20 minutes went well wide of the post. And then a second one five minutes later went wide.

Ulster held its breath, hoping their team wouldn’t rue two missed chances to get their noses in front.

But then the Dragons breathed new life into the game and on 28 mins Andy Tuilagi went over and with a conversion from Prydie, the home team had their noses back in from 13-7.

Will Ulster regret those penalty misses later in the game?

Not if Nick Williams had his way and two minutes later he goes over for a try. Pienaar convert and Ulster lead by a 13-14.

However, Prydie pegs Ulster back with a penalty conversion and the Dragons went two ahead 16 v 14.

Then Ulster kicker Pienaar charges down a Dragon clearance and he goes over in the corner.

However, he missed his conversion and Ulster went in at the break leading 19-16.

And that lead is increased shortly after the break when Pienaar puts a penalty between the posts give us a six-point lead.

He extends Ulster’s lead with a penalty and the scoreboard reads 25-16 in favour of the visitors.

But there appeared to be fire in the Dragons belly and Prydie converted a penalty to narrow the gap to just six points and keep his team in the game.

However, Ulster have other ideas and Darren Cave overs the line and with Pienaar’s conversion Ulster stretched their lead to 13 points, 32-19.

And then the rout really started with first Andrew Trimble going over on 60 minutes and then Jaren Payne on 74 minutes. With Pienaar’s double conversion, Ulster were now 46-19.

There was little response from the lifeless Dragons who double Ulster speer like tries go through their hearts.

As the clock ticked into the red, referee Peter Fitzgibbon blew the whistle and Ulster maintained their early Pro12 charge.