ADMIT YOU WERE IN THE ‘RA GERRY, SAYS PETER ‘RED BERET’ ROBINSON 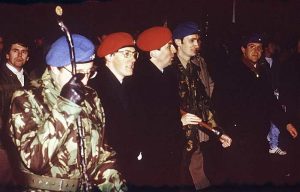 ONE-TIME ULSTER Resistance cheerleader Peter Robinson threw down the gauntlet to Gerry Adams last night and told him: Admit you were in the IRA.

In a speech to DUP councillors in Antrim, Mr Robinson said that Sinn Fein needed to come clean about its members’ pasts.

Mr Adams has consistently denied that he was in the IRA, never mind being the ‘Officer Commanding’ (OC) in the Provos.

“If republicans genuinely want the truth to be told let Gerry Adams admit he was in the IRA. Let him disclose he was in its leadership,” said the First Minister, who once proudly wore the Ulster Resistance’s red beret during an Ulster Hall rally in the 1980s.

“Let republicans confess responsibility for the Northern Bank robbery and let Sinn Fein leaders who have been named for involvement in terrorism by their former IRA colleagues come clean.” 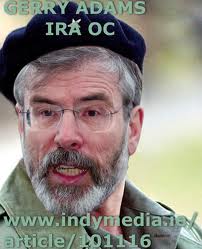 I’ve never been in the IRA, says Gerry Adams

In a speech on reconciliation Mr Kearney said that unionists had to accept their role in the past and referred to the role of DUP politicians in Ulster Resistance. He also accused Mr Robinson of living in “a time-warp”.

There have been tensions recently between Sinn Fein and the DUP over delays to Executive decisions.

Last week the first minister claimed Sinn Fein’s fear of the SDLP was “often paralysing decisions in the Executive”.


One Response to ADMIT YOU WERE IN THE ‘RA GERRY, SAYS PETER ‘RED BERET’ ROBINSON