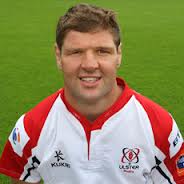 ULSTER have suffered a hammer blow with skipper Johann Muller set to miss several matches because of a hand problem.

A medical scan after the game revealed Muller had ruptured ligaments around his thumb and he had surgery on Sunday.

Muller, who has played 50 times for Ulster, is expected to be out for up to eight weeks.

That would rule him out of a string of Pro12 matches and the back-to-back Heineken Cup clashes with Northampton in December.

Unbeaten Ulster’s next match is at home to the Dragons in the Pro12 this Friday, 25 October.