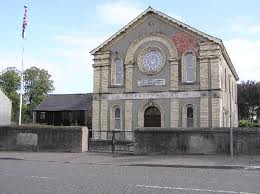 Glenavy Protestant Hall which was targeted this morning for the fourth time this year.

AN ORANGE Hall has been targeted for a fourth time this year in sectarian attacks.

Two tyres were put against the front door or Glenavy Protestant Hal around 3.40 am this morning and set on fire.

Flames licked up the front of the door and smoke damage was caused to the interior.

Police have appealed for information about the attack or if anyone spotted suspicious activity in the area to get in touch.

In August, wheeled bins were pushed up against the front gates of the Co Antrim hall and set alight.

The attack caused scorch damage only but the Orange Order said it was the third time the building has been targeted this year.

Paint bombs were thrown at the hall in separate attacks in February and July.

An Orange Order spokesman said: “This latest deliberate attack appears to be part of an ongoing campaign – which is becoming more serious and sinister in its nature – against the Orange culture and heritage in south Antrim.

“As an institution, we would urge the police to devote more resources towards the prevention and detection of such attacks on the Protestant community in Glenavy.”